Are you able to keep pace with the changes that are coming to Guest Crew?

Our social features are finally live; let us see what has changed and what is new.

Remember those old days when we used to do a social push for a cause, a blog post, or just to promote something on the guest crew forum. We have automated that with a twist.

That feature is now known as a social campaign. On a social campaign, any shares that you do – be it a facebook share, twitter tweet etc. those shares are not posted immediately, rather they are saved on the Guest Crew system and guestcrew automatically releases them on the due date of the campaign.

For example, this campaign about the “International Girl Child Day” has a social reach of 3,05,396. We have run this campaign for the past whole month. During this time all the social shares that were posted on that campaign were stored in GuestCrew via our social apps. Now, on the due date of the campaign, which was 11th of October, all of these month long accumulated social shares was released, automatically, at the same time.

The idea is simple. You get social shares on your posts and updates everyday, but they happen randomly. Which is why it does not goes viral. Look at some of your blog posts, they got some social shares … now imagine if all of those social shares were posted at the same time. That will flood the social media and cause a viral effect most of the time.

We, at GuestCrew.com were busy for the past few months making this system. This is the ultimate social media marketing platform – launch something with a bang, get the support for your crowdfunding projects. Stand up for a cause, or simply get your message out there. Amplify your voice and reach a greater audience.

As a GuestCrew tradition, we launch every new feature with a contest. So, we are once again planning to do a contest. 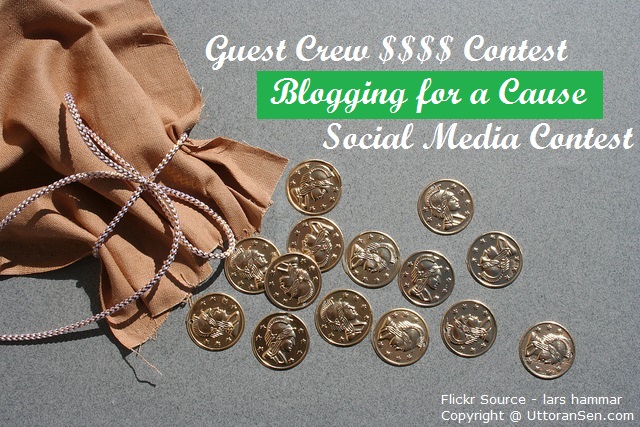 Blogging For A Cause

This time, we are doing a cause based contest – “Blogging for a Cause” #BloggingForACause

We have already done a few successful contests so far, paying $1000+ in Cash Prizes!

February 2014 – Daily Cash Give Away Contest

This time, we want to do a Grand Contest with Prizes totaling several thousand dollars!

Guest Crew will put $500 cash for the contest. With sponsors, we can raise this budget to a pretty high amount.

Here’s a full list of benefits that the sponsors gets:

Note: This is a full Cash Contest, so we can only accept $ for sponsorship.

Now, here are the contest details:

The contest idea is very simple. Participants need to create a social campaign. Promote it. And the campaign with the largest social reach will win. There can be additional prizes for 2nd, 3rd and so on. We like to spread the prizes, so there will surely be more than one winner.

International Day of the Girl Child 2014

(Campaign Topics will be added later)

If you want to participate in this contest, please select a topic. Let me know about it and will assign that topic to you. You will then make a campaign on that topic. You need the following things to start a campaign: A small but catchy article. An image is a must; it should be 880*440 pixels as that is the best size for twitter. You must own the image copyright or use an image with permission. You can add additional images or videos if you want. Here is the form to start a social campaign.

So, when you contact me, send me the following information:

We will do an official Social Campaign to promote the contest and announce the start of the campaign. This blog post is only an update about the upcoming contest.

As a participant of this contest, you need to do the following things:

Write a blog post about this contest announcing the contest and that you are going to join it. In the blog post, mention about the sponsors and give a link to the sponsor’s website.

Full list of Contest Participants (will be updated later).

Thank you everyone for your support,

Looking forward to have an exciting contest ahead.